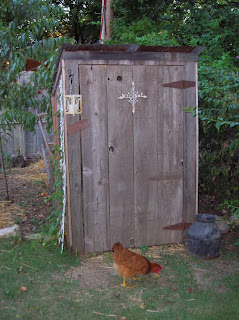 Our chicken house, AKA the death chamber.
I've written about the three girls Chris and I raised in our office and set free to roam in the backyard.  They started laying fresh eggs ~2 weeks ago, and last Thursday night an opossum put his natural instincts to work, leaving us one headless black chicken and a brown chicken with missing tail feathers.  I got up at 5:30 a.m. to let Jacques out when I noticed the chicken run was still open...yes...it's our fault the chicken was massacred.

Heart beating I raced out, opened the hen house and piles of brown and black feathers greeted me.  I immediately knew our chickens were dead (thankfully a few minutes later I discovered the two brown chickens as far from the hen house as they could get.)  Peering around the run to an area Jacques was barking, I saw an opossum in full dramatic death act.  While he looked dead, I knew better and ran inside to get Chris to come deal with the little bugger.  I figured gunshots in our neighborhood aren't all that abnormal.  By the time we got back out there the opossum was gone.

Chris got the shovel, picked up the black chicken and headed to bury it.  Looking at the two brown chickens frozen with fear across the yard I said, "Shouldn't we show them, so they know?"  "They're not that smart Paula," he replied, and went to dig a hole.  He was ticked, and kept saying, "I was going to eat that chicken."  I suggested he eat the black chicken, and his Gma said if he was a real famer he would have, but he wasn't interested in an opossum's leftovers.

So I'm grieving and feeling really badly that we didn't protect the chickens.  We're on the hunt, in two ways really.  For an opossum and for some chickens.  We're experimenting with a live animal trap for the opossum, and craigslist for chickens.  We hope for hens, I'm not ready to turn my office into a chick nursery so soon.

And, for the comfort of those of you who are animal lovers (how could you love an opossum) - we plan to free the murderer in the country, far from our chickens.  I realize, he was just following his instincts, as angry as that makes me.
Posted by Love Local Food at 9:55 PM