Lessons learned from a year of local eating - Part II 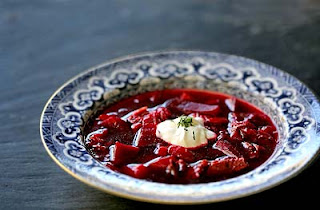 A beautiful bowl of red Borscht - image from
http://simplyrecipes.com/recipes/borscht/.
Last time I shared three lessons Chris and I have learned from our year of intentionally including locally grown foods in our home.  Here's a few more lessons - hopefully they'll help or encourage you in your local foods pilgrimage.

4. Lesson learned:  When butchering a chicken, dip fast. To remove feathers from a chicken after butchering, they are dipped in very hot water.  Thus, when Chris butchered our last chicken, he had a pot of hot water ready.  After dipping and defeathering the bird, he found he had not only made it easier to remove the feathers, but cooked the bird in the process.  "You need to dip fast," my Mom told him.  Lesson learned - maybe he'll get another chance to try next year (but I hope not)!

5.  Lesson learned:  Beets don't always taste like dirt.  To me, beets have always tasted like dirt.  If I was a pregnant woman with pica, I would enjoy beets, however, I am not.  Therefore, I avoid beets.  Chris made Borscht tonight, and I discovered I like beets.  Amazing...fresh local food is often like this.  When it is straight from the land, the flavor is amazing.  My cousin didn't like apricots, until she had them fresh from my aunt's tree.  Chris's coworker didn't like pears, until he had a juicy one from my parent's farm.  The stories are endless....fresh local food has amazing taste!

6.  Lesson learned:  Eating locally creates connections among passionate people.  In the past year, we attended and hosted more than one meal where each dish on the table had a story, and its history was shared with excitement by the person that brought it to the table.  Over local produce, meats and breads many gardening secrets have been shared, along with excitement about the current harvest or dreams of future harvests.  These are meals and experiences with people who love the land, and as that credit card commercial says, they are priceless.
Posted by Love Local Food at 10:10 PM 1 comment:

Lessons learned from a year of local eating - Part I. 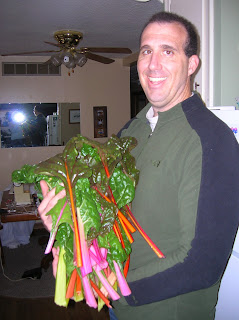 The last harvest of chard from our garden.
Chris and I began including more locally sourced foods in our diet approximately a year ago.  It was about this time we saw "Food, Inc.," then read "Animal, Vegetable, Miracle" by Barbara Kingsolver.  We were challenged, had great aspirations, but found reality is often different than our visions.  In this two part post are a few insights we've learned throughout the last year.  Many are lessons we'll work to improve upon when we get another change next season...ahh, a clean slate!

1.  Lesson learned: Keep the emotions for your husband, not the chickens.  As I shared earlier this summer, our black chicken was killed by a opossum. A couple months later I saw a hawk on the wood fence staring at the two remaining chickens, and I decided I needed to temper my emotional connection to the animals. A month ago our new puppy tore the chest open on the little brown chicken, but it lived. Thanksgiving weekend Chris and I woke up to find one chicken on the windowsill, and one dead. Two days later Chris "offed" the remaining chicken, after all, they are animals that need companions. The long, cold winter would have been really lonely for that last bird.

2.  Lesson learned: Time management is important to local food security.  Want to eat primarily local food - it's a great idea but when the season between mid-fall to mid-spring arrives you better have been a good squirrel.  If not, you're going hungry.  In order to eat the most local food possible, insight and planning for the future must happen.  Winter meals begin in the spring and summer.  And, you must have the time in your schedule to prepare them when the season is ripe (preserving, gardening, etc.).  So, begin preparing now for the future - here's a great article by Mother Earth News to get you started.

3.  Lesson learned:  Don't boil the heck out of the cans - they must boil, but a fierce, rolling boil isn't best.  The Sedgwick County Extension Agency Master Food Volunteers have an excellent canning class which is offered for a very reasonable fee. (Find future classes here.)  After taking the class early in the season, I decided to can June berries.  I boiled the berries in the canner for the appropriate amount of time, and when I dumped the canning water it was purple.  Ugh, during canning the liquid seeped from the cans.  Because I couldn't tell which can leaked, they all were considered unsafe for extended time on my basement shelf, so we ate them soon after canning.  I'm trying again with June berries next year.

(More lessons learned in the next post...)
Posted by Love Local Food at 3:53 PM No comments: