Food grade wax at the farmer' market, is this really local? 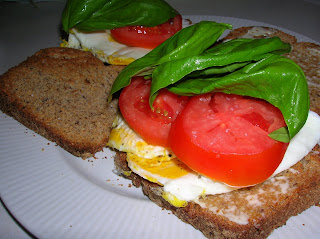 An egg sandwich with tomato, basil, fresh mozzarella cheese and homemade bread.
Recently Chris and I found a deal on fresh mozzarella cheese, and wanted to have tomatoes with our cheese.  He headed out to the farmers' market to purchase some ripe produce, and brought home red tomatoes, along with food grade wax.  Yes, food grade wax on farmers' market tomatoes.  My culinarian spouse said, "they're probably Sysco tomatoes."  To say the least, I was disappointed.  Now, I'm not saying foods from Sysco are bad.  I am saying when I go to a farmers' market, I expect to get locally grown produce -- ripe, fresh picked, succulent, yummy.  Unfortunately, it's not always the case, buyer beware.  Is anything simple these days?

In my eyes, the integrity of the grower has been tainted.  No, they weren't promoting the tomatoes as locally grown, but I assume if a farmer is at a farmers' market, they are selling produce that actually grew in this area.  And honestly, maybe they did grow these tomatoes and covered them in wax, but I doubt that's the case.  Sure, they just wanted to provide me with what I want.  But what I want is seasonal food, if tomatoes aren't ripe, I'll eat something else.  And, if I want wax on my tomatoes, I'll buy them from the local chain grocery store (and sometimes I do.)

I believe most farmers do sell locally grown crops, but to those who don't, here's my plea -- farmers, we want to support you, but in return we want locally grown foods.  I wonder if this producer realizes the amount of my sales they lost to other producers due to one Sysco tomato.  There's a business concept in there somewhere.
Posted by Love Local Food at 9:03 PM