Soil Sampling in Wichita: This Sounds So Interesting!! 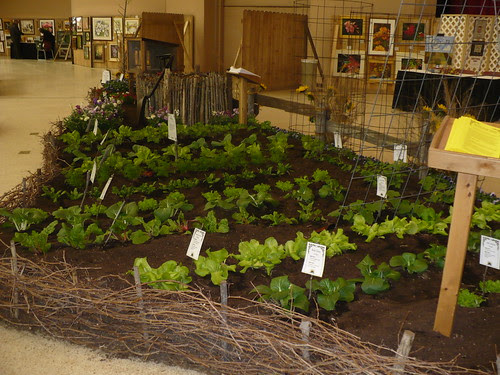 The Hobbit's Garden at the Wichita Garden Show
Photo Taken From The Demo Garden Blog.

Wondering how good your soil is for gardening this year?  Chris and I have never had ours tested, and really don't know much about soil, so I am totally excited about the next Wichita Organic Garden Club meeting.

Next Tuesday, Rebecca McMahon, Sedgwick County Extension Agent for Horticulture, will be discussing soils.  She is asking each person to bring one cup of garden soil to the lecture in a clear glass quart-sized jar with a tight fitting lid.  She will lead a hands-on evaluation of your soil sample.  You may be amazed at what you learn about your soil with some very simple techniques.

Rebecca is someone I highly respect, with a ton of knowledge about gardening and growing techniques.  She designed the "Hobbit" Garden for this year's Wichita Garden Show and worked with the Master Gardeners to make it a reality, resulting in two major awards.

The meeting will be at Botanica on March 22, 2011 at 7:00 p.m.  As always, admission to Botanica is free for meeting attendees, and monthly meetings are open to the public.
Posted by Love Local Food at 7:49 PM No comments:

Locavore Symposium at Dyck Arboretum of the Plains - March 19th

Have you heard about the Locavores on the Prairie Symposium?  Had I known this would be happening on March 19th, I would have planned the birth of my baby at a time other than mid-March!  (Ok, maybe not, but I'd love to attend this program.)

The Locavores on the Prairie Symposium is a day of presentations about eating locally in our area.  I find it incredibly interesting that throughout the day, the presentations are "generally ordered in the amount of energy that product requires for our consumption."  How creative!  There will be food samples and a local foods lunch made by a gourmet chef.  If you attend, raffles for local foods gift baskets will give you a chance to take home some locally produced items.

For more information and a schedule of topics, check out the Locavores on the Prairie Symposium website.
Posted by Love Local Food at 6:20 AM No comments: 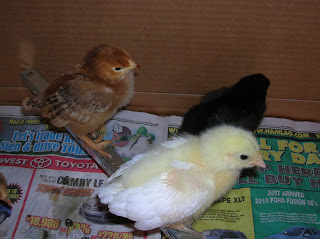 Destination:  Fresh Eggs
Recently I asked Chris for a word to describe us raising our baby chicks in a Chick-fil-A box, I expected something similar to "ironic."  He replied, "predestination." Oh  my!
When we began producing more of our own food, I finally connected why baby chicks are such a popular decoration at Easter.  Until then, I thought they were a cute part of the season, like Santa.  Now I know they show up this time of year because it's time to raise them if you want fresh eggs before the summer is over!  Trust me, they're easy, and they produce protein that is much more colorful than traditional store-bought eggs.

It's baby chick time!  Chris and I got four chicks last weekend from Atwood's in Andover.  (They're also available at Tractor Supply Company.)  Keeping chicks, and chickens, is actually surprisingly easy -  if they weren't there's no way I'd have them with a baby due in 11 days.  There's a ton of info online about how to raise them, here's one quick guide, and a simple Google search will provide about everything you need to know.   Even so, let me share a few things we learned through our first experience last year:

1.  When you pick them out, watch them for a few minutes to learn their personalities.  I thought a chicken was a chicken, until Chris went to the store alone last year to bring home our third chick.  He chose the one who ran across the tub and jumped on all the others.  Turns out this chick was just as tough and comical when it became a full grown chicken. 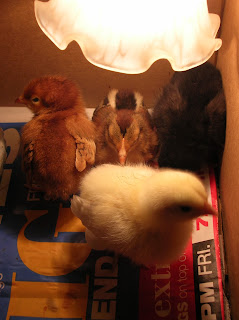 3.  Spend time with them when they're young if you want to be able to catch them when they are older.  Last year, when we knew we would be gone after sunset, we would put the ladies in their coop.  Unfortunately, we didn't spend enough time holding our chicks when they were young, so every time we wanted them in the coop before sunset, we had to chase them around the back yard to catch them.  This year we're *trying* to create tamer chickens, a task that would be much easier if we had children who enjoy cuddling the little girls.

4.  They get ugly fast.  To the left is a pic of the chicks a day after we got them, fuzzy and cute with only a few wing feathers.  The pic at the top is of them less than a week later.  They've already gotten a lot more feathers, and while they're still cute, soon they'll have feathers sticking randomly up off their heads and bodies.  So, enjoy them when you first get 'em.  But, cuteness isn't the point now, is it.

5.  They're just chickens.  Trust me, learn from my experience and don't get attached.
Posted by Love Local Food at 5:18 AM 7 comments: 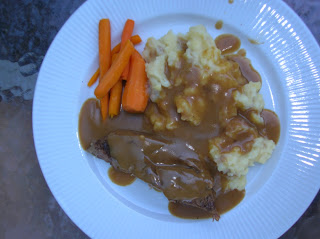 Both produce & meat are available in CSA subscriptions locally this year!
My last post introduced the concept of Community Supported Agriculture, or a CSA.  CSA's are a great way for a community to support a local farmer, and for that farmer to provide regularly for the community who supports them.  While there are areas in Kansas who have abundant CSA opportunities, ours is one where I hope to see growth in the future.  Below are the great CSA opportunities in our area that I know about, and details about each one (they're all different).  Know of others in the area?  Contact me so I can share with community members who are interested.  Help me support local food & our local farmers!

This season, whether you join a CSA to support local farmers, shop at the farmers' market, or grow your own veggies, choose as much fresh, locally grown foods as you can.  I know we will!