A "Smokin' Awesome" Apple Pie for my Sweetie Pie 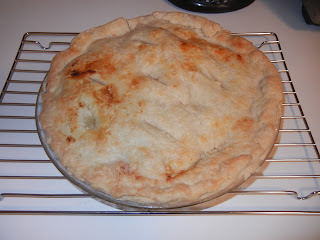 Fresh from the oven!

This week we picked apples from my grandfather's green apple tree.  Apparently, when you don't pick them soon enough, they start to turn red and begin to taste mealy.  "Can we do anything with the mealy ones, make pie or something?" I asked Chris.  "Nope," replied my chef husband.  My Mom, an ol' country gal who follows the horse around and tastes what it eats, figuring if it doesn't kill the horse, it won't hurt her (yes, that's really true) said, "of course you can use 'em."  So this week I made an apple pie out of mealy apples for my sweetie pie.  How'd it taste?  The rave reviews ("smokin' awesome") from my chef indicated that apple pie is a great way to use overripe apples.  Here's how I made it:


Pie Crust (makes double pie crust)
I looked for a recipe in my cookbooks, but couldn't find one as simple as what I made as a child from my Mom's battered, beaten and faded "Christian Home Cookbook".  So, since we now live only 10 minutes from her, I paid her cookbook a visit.  Here's the simple recipe:

3 cups flour
1 tsp salt
1 cup lard or shortening (gasp, yes, I know how this impacts cholesterol, but it has the opposite impact on my taste buds!)

Mix the flour and salt.  Cut in the shortening.  Slowly add approximately 2/3 cup water until dough is a proper consistency for rolling into crust.  I used about 2/3 of the 2/3 cup of water on the day I made the crust.

I'm not an expert pie maker, but my mother-in-law is pretty close.  From her I learned it's important to chill the dough before you roll it out.  Chris says the reasons for this are:  1.)  It allows the fat to harden which helps to create a flaky crust, 2.)   It allows the water to distribute and become homogeneous and 3.) It allows the gluten to rest so the pie crust doesn't shrink (mine didn't shrink at all - first time for that!)  The resting/cooling down process is so important, I've even heard of people chilling their rolling pins.

Apple Pie Filling
I looked in my cookbooks for a recipe, and many of them used an egg.  Apples and egg together didn't sound appetizing.  I found my recipe in "Whole Wheat Cookery, Treasures from the Wheat Bin," a cookbook I picked up at a used book store a few years ago.  Here are the details:

3/4 c. brown or white sugar (I used white sugar)
2 tsp. cinnamon
1/4 tsp. nutmeg
1/4 tsp. ground cardamon
8 c. tart apples, cored, peeled and thinly sliced (I like the nutrition of the apple peel, so I left it on.  Plus, these apples were not sprayed with any chemicals, so it wasn't a concern to leave on the peel.)
2 tsp. lemon juice
1 Tbsp. butter

Combine sugar & spices.  Add apples, stirring until well coated.  If apples are extra juicy, sprinkle on one or two tablespoons whole-wheat flour, tossing well.  Sprinkle with lemon juice.  Roll out half of pastry to about 1/8" thickness and fit into buttered 10" pie pan.  Pile apple mixture into pastry shell, mounding apples higher in center.  Dot dabs of butter over apples.  (I forgot to dot dabs on the apples, so I put them on top of the crust.  Chris thought there was butter in the crust.)  Roll out remaining pastry.  Place over apples.  Seal edges & cut steam vents.  Bake in preheated 425 deg. oven 15 minutes, reduce heat to 375 deg. and bake about 35 minutes longer or until crust is golden.  I use our toaster oven for baking when the air conditioning is on.  Since the oven tends to burn edges, I left the pie covered with tin foil until five to ten minutes before it was finished.  My crust was beautiful and didn't heat the entire house by using the large kitchen oven. 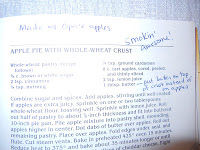 In this post I wrote how students rejected fruit because it was imperfect.  Turns out Chris and I were the same way, so we learned a lesson this year, and will for many years down the road use our mealy apples for "smokin' awesome" apple pie (and yes, that's now written in pen next to the recipe in my cookbook.
Posted by Love Local Food at 6:43 PM 1 comment:

Onions for a lifetime. 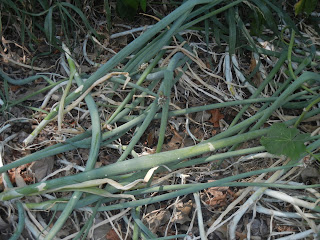 They're not pretty, but they sure are tasty.

If you are a regular blog follower, you know our little family moved into a new home.  There is a lot of work to do, including adding a garden, fruit trees, berry bushes and the like.  The old owners liked plants, but didn't seem to care for edible plants, except onions.  We have wild onions for what feels like could be a lifetime.  Onions in the front yard, onions in the back yard, onions on the side of the home.  Strong onions, onions I cut standing out on the patio so I don't shed onion tears.  Yes, we're using onions, and boy are they local!


Happy 4th!!
Celebrate your Independence this 4th of July as we did for "Food Independence Day" a couple years ago.  Here's our local menu from that celebration.
Posted by Love Local Food at 1:48 PM 4 comments: