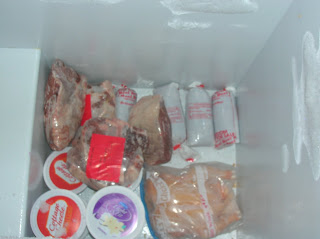 Almost out of the side of beef we got from a local farmer.
Good thing we've got another side coming in June!

Subjects such as terrorism are not a huge interest to me, however, while reading "Biological Terrorism Remains a Threat" in an issue of the Wichita Eagle, I began to realize an additional benefit to eating locally - protection from terrorist attack.  What, you may say, does local eating have to do with terrorism?  Surprisingly, a lot...and I say that not to scare you, but to further encourage you in your locavore endeavors.  Your food choices really do make a difference, even in the area of terrorism.

As the article points out, "it will be necessary to remain vigilant against a biological terror attack on the U.S. food supply."  Additionally, Sen. Pat Roberts said recently, "Experts in the field warn, this threat is not an 'if' but a 'when.'"  Does that make anyone else uncomfortable?

One of the big concerns cited as a risk in agroterrorism is foot-and-mouth disease, which can impact beef production.  "In the United States, if one animal in a herd is determined to have foot-and-mouth, the whole herd must be destroyed as well as animals within a several-mile radius.  I have been told by a beef representative that most of the meat in Kansas is from small family farmers, but think about Dodge City, and the impact this would have on the herds there, on the small farmers that are near there, and on our food system.  Devastating.

Purchasing from small farmers keeps them in business.  Keeping them in business prevents all of our meat from being produced in a large feed lot operation, and decreases the potential impact on our food system if and when an entire herd has to be destroyed due to a terrorist attack.  See the connection?  Yay to you for choosing foods sourced locally from small family farms!
Posted by Love Local Food at 11:46 AM No comments: